In the intro paragraph, Captain Allen Adam is referred to as “Captain Adams” again (I found a reprint from the 1970s that corrected the name).  It sets up the issue nicely.  “Captain Adams, USAF, nuclear genius, celestial authority, an expert in the art of atomic war, had a problem… one that began in Smeedville, Georgia, and had it’s conclusion in a galaxy beyond the borders of man’s celestial charts!  Out where a small boy rode on the wings of a nightmarish creature — that could not exist — and did!”

Well, Smeedville doesn’t exist. But that’s a petty thing to bring up.  The issue opens with Captain “Adams” visiting the Georgia home of his buddy, Sergeant Jeff “Gunner” Goslin.  Gunner’s wife is worried because their boy Billy has been having imaginative dreams (the horror!) and has been asleep for two days!

Billy’s parents are worried because he sleeps so long and when he awakens, he tells stories of riding a bird through outer space.  He described the dark side of the moon, something only ever seen by Captain Atom, and he described it accurately.  So Cap thinks maybe Billy is both in his bed and swimming in space.  He assures Gunner that Billy will be alright, and jumps out the window.

Cap flies off into outer space at 24,000 mph.  There is a great panel of him flying upside down. Ditko at his finest.

Cap flies out farther than man has charted and stumbles upon a giant space bird.  It attacks so Cap fights back with (new power!) an atomic blast.  The bird is stunned.  From a distance, Billy is watching the “fight” from the back of another space bird.  He recognizes Cap as a fellow human being and flies over.  How Billy can be there and in his bed is not explained.  How Billy can survive in space is not explained.

And check out this drawing! I guess Ditko had a problem drawing kids. Billy’s mouth is about the size of his whole head!  Oh, I love Steve Ditko’s art.  He’s brought us some great stuff over the years (he helped The Great One – Stan Lee – develop Spider-Man, created Doctor Strange, the Creeper, Hawk and Dove, Shade the Changing Man, and Starman (Prince Gavyn) to name a few).  Any great artist can have an off day.  Except maybe Dan Jurgens. 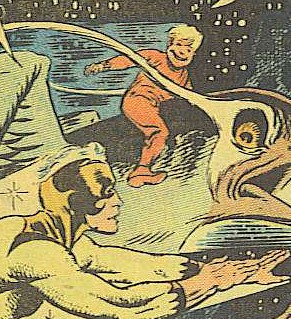 Did somebody say doughnuts?

So Cap tells Billy he’s been “in the dream” too long and his folks are worried about him.  Back on Earth, Billy wakes up and Cap flies in (looking like he’s in desperate need of a visit to the gym.  Oh, Ditko…) and tells Gunner his kid isn’t a liar.  Billy promises not to take such long “trips” in the future. The end.

It was a short and sweet story.  Not all super-heroey, more science-fictiony.  Not a lot happened.  The focus of this issue was more on the “Spies from Another World” story than the Cap adventure.  Still, I give Joe Gill a B for this one.  Ditko, you could’ve got an A, but I had to dock points for Bigmouth Billy and Fat Cap. B for art.