This issue was published in May of 1988.  It opens with General Eiling paying a visit Dr. Megala.  He demands that Megala quit “playing sick” and gets back to the base.  Eiling wants Megala on hand for the launch of something called the Force-One.  Megala points out he is convalescing and that he is no longer needed for the Force-One project anyway.  Eiling tries to convince him that he needs to come because the Force-One is a vital key to keeping Major Force in check.  The General leaves, meeting Allard outside with a chopper.  Allard asks if there is any improvement in Megala’s condition.  Eiling says Megala feels guilt over unleashing Major Force on the world.  More likely, he feels guilt over the government’s treatment of Nate and could care less about Clifford Zmeck. 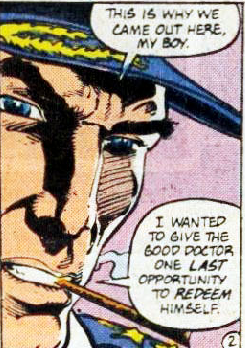 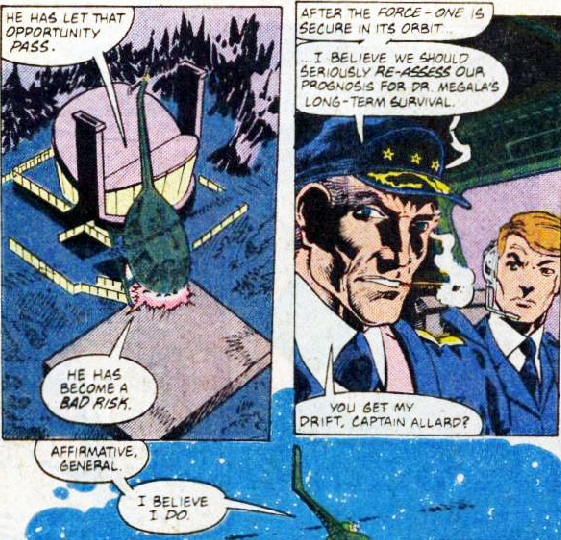 Later, as Nate tries to wrap a gift, he receives a call for help from a Colonel Uber.  It seems that Eiling’s helicopter never made it back to base.  Uber, fully aware of Nate’s secret identity, is asking for Captain Atom’s help finding the General.  Nate is not amused. 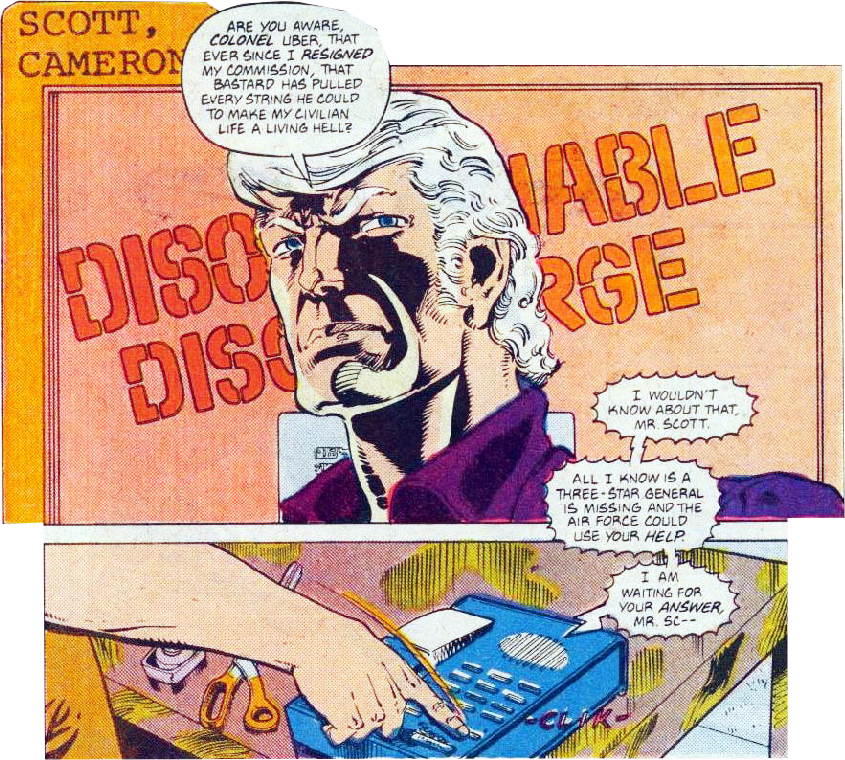 Back at the base, it seems Megala decided to come in after all. He says it was the General’s “pep talk” that brought him in.  Noticing a glitch, he goes up into the gantry to repair the faulty Force-One.

Later, Nate presents Peggy with the birthday gift he bought her: a bracelet she’s had her eye on for a while.  Peggy begins to cry because this is the first birthday Eiling hasn’t called her since he became her stepfather.  Not expecting this guilt trip, Nate drops in on his ex-wife Angela after dropping Peggy off.  Of course, Angela has been dead for a few years so he visits her at the cemetary.  He still doesn’t understand why she married Eiling after his own “death,” but concedes that he was a good father and must have been a good husband.  He drops flowers on her grave and tells her he knows what she’d want him to do.

Cut to some place completely dark where Eiling and Allard are being held.  Allard lights a match, but visibility is near zero.  We get a rare glimpse of Eiling’s human side when allard apologizes for passing out and the General says there no shame in it; he passed out himself.

Back at the base, Captain Atom shows up with Eiling’s crashed helicopter.  He found in on the north face of Wiley’s Peak.  Colonel uber appreciates Cap’s help but when pressed, Nate refuses to tell him why he changed his mind.  Uber theorizes that the General was kidnapped by Major Force, who has been AWOL for ten days.  The Major has strayed 200 miles outside of their sensor range.  Uber explains that Megala’s Satellite (set to launch that night), the Force One, will fix that glitch and give the military constant tabs on Force.

All the while Cap and Uber are talking we see Megala hard at work on his rocket.  Atom flies off to continue his search for General Eiling.

Eiling and Allard manage to burst out of their dark cell.  Allard is convinced that Major Force is their captor, but the General is not so sure. Allard recall nozzles coming out of the helicopter’s control panel and shooting nerve gas at them.  Eiling says the gas only could have been put in at Megala’s retreat.  The evidence doesn’t add up to Major Force.  Eiling can recall seeing someone beat their downed helicopter with an iron mallet before passing out.

Just then, a television mounted on the ceiling outside their cell comes to life and General Eiling meets his kidnapper.

“Master Militarius,” according to Allard, was one of the villains Captain Atom fought while he was working in secret (the “Big Lie” – Nate’s cover story).  Whomever this is, they most likely know Cap’s cover is a lie.  Allard and Eiling don’t have a chance to work this out.  A cannon emerges from the walls and begin to shoot bouncy black balls around the room.  The two captors use the wooden door of their cell as a shield, but the balls begin to smash it to bits.  Clearly Master Militarius means to kill them or do serious bodily harm to them.  The two prisoners use the door to jam the cannon, which destroys it.  They go into the next room, the room that housed the cannon, only to find another monitor.  Master Militarius tells them that the entire house was recently renovated with booby traps.  Allard hears rushing water.  The room begins to fill with water while back at the base Uber continues with the countdown for Megala’s rocket.

General Eiling and Allard duck under the water.  Eiling finds a weak spot in the wall where the wood had been rotting and shoves his weight into it.  The two captors burst out of the room, and completely out of the house onto a tranquil hillside.  Eiling thinks their escape was too easy.  He finds Militarius’ costume in some nearby bushes along with a note warning him that he’s in danger of being listed as AWOL.  Allard points out the launch of Megala’s rocket in the distance.

As the two hike back to base, we see Babylon hiding in the bushes wearing Militarius’ coat.

Later, back at the base, Eiling confronts Megala.  He has figured out that it was Babylon that kidnapped him on orders from the doctor.  Megala explained that he needed Eiling out of the way while he added something special to the satellite’s payload.  There is a monitor connected to a device in the rocket. At the point of Megala’s death, a message will be broadcast to the world by the satellite.  The message will expose the truth about Captain Atom and expose Eiling’s involvement.  It is Megala’s insurance policy (Eiling has tried to have the doctor killed at least once before).

Captain Atom appears, with a very drunk Major Force in tow.  He found the Major stinking drunk in the Swiss Alps, and returned him to Eiling as a favor to the Swiss people. 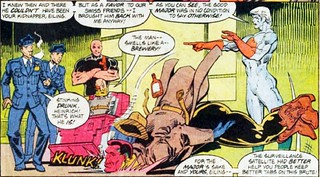 This was not my favorite issue of Captain Atom.  There was not a lot of super-heroing going on.  While I do like to see Nate’s human life, I’m not overly fond of Eiling-heavy stories.  And Allard is such a dork, I wonder how he ever rose so high.  Also, Babylon’s deathtraps really could have killed Eiling and Allard.  Like dead for realsies.  Is that really the kind of guys Babylon and Megala are?  The art was great, though.  Pat Broderick was doing great.  I give this issue an A for art and a C+ for story.

I recently posted one of adamantis’ pieces here on this blog.  It was a Captain Aom/Captain Marvel team-up of sorts.  Upon exploring his deviantart page, I found a whole slew of great Captain Atom pieces.  This guy really has a great eye and imagination.  Honestly, I’d be pleased if he was tapped to be the artist on a new Captain Atom series (if that were ever a thing).  If you haven’t already, you should really check out his art.

Power Girl and some other people…

Captain Atom and Power Girl – Don’t I Know You?

Clearly, Adamantis loves the Captain Atom/Power Girl couple.  There’s so much more than this on his page. You’ve got to see it!

This last one is my absolute favorite:

This one is just beautiful, and really was bound to happen (Cap and Captain Marvel use the same “font” in their logos).  A digital artist from the UK, Adam describes his digital art thusly: “I tend to draw a fair bit of fanart depending on my mood. At the moment my gallery has been somewhat dominated by Powergirl. I also draw other DC/Marvel/2000AD comic related images, anime or computer game fanart, my own original fantasy and sci-fi characters, and the occasional Transformer and Warhammer 40’000 image.”

This image has a story attached:

“Nathaniel Adam cursed his luck at being hurled across dimensions again, only to bump into a large green man who decided to start hammering him into the ground, matters got worse when a hammer wielding buffoon joined in. The pair were incredibly strong, but not the brightest of fighters, and with barely any provocation on his part they handily started fighting each other. This gave Nathaniel his chance to leave, which might allow him to try and find his bearings.

“When a flying woman suddenly confronted him, and instead of attacking introduced herself, a sudden sense of hope struck him that there was at least one sane superhuman native to this world…

“Carol Danvers moved promptly when the news of the Hulk was engaged in a brawl with, according to reports, the Silver Surfer. The Surfers presence on Earth always meant something was up, and when it was then reported that Thor had entered the fray she couldn’t help but sigh.

“As she approached the area she noted that the energy she was sensing didn’t correspond to the ‘power cosmic’ of the Surfer. The energy was unique to her senses, and it was moving away from the inevitable brawl between Thor and the Hulk that was now occurring thankfully away from anywhere populated. Leaving Thor and Hulk to their own devices she moved to intercept the mystery individual, to see a silver skinned man bearing a chest symbol not dissimilar to her own. Could the man be a member of the Kree?

“She opted for diplomacy, there was something about him that made her think it was worth a shot, and so she introduced herself…

“(Two underrated powerhouses of their respective Earths. Carol Danvers/Ms Marvel/Captain Marvel of MARVEL comics and Nathaniel Adam/Captain Atom of DC Comics. I admit this started as a Power Girl/Captain atom picture, but then i had the idea of having Ms Marvel instead.)”

You can find Adamantis on deviantart.com, where he’s posted a lot more Captain Atom images among other beautiful pieces.

Another tumblr.com find, this nice piece was done by Tom Kelly. According to his deviantart.com profile, he’s a digital artist from Chicago, IL.  I really like this piece and some of his other stuff on his web site.  Check out his Deadpool illustration on his deviantart page.  It is also very cool.