“Battle Beyond the Green”

This is a continuation of the story from Captain Atom #16 in which the Justice League was facing off against an angry Red Tornado (in hurricane form) and called Cap in for support.  Available for sale April 5, 1988, this story featured Cap’s first real brush with elementals (at this point Firestorm was not yet solidly established as the fire elemental), and his introduction to the Black Racer.  This book opens with what I feel is one of the greatest renderings of Cap ever to appear in print.  Broderick, Smith, and Eiber did not fool around with this one.  It is the Modern Age Captain Atom at his absolute best. 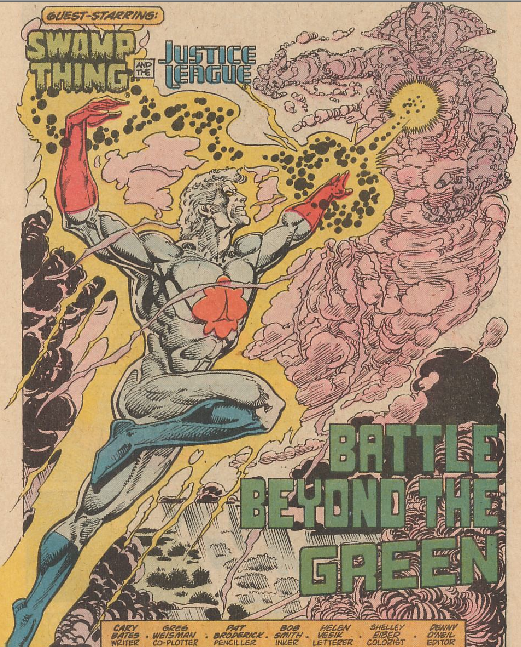 Absolutely beautiful artwork.  Art like this is a big reason I loved Captain Atom in the 1980s.  The only beef I have with the artwork is a minor one (Cap’s bruises from the fight with Major Force have miraculously faded away).  I truly love the artwork of The One and Only Pat Broderick.  Not sure I can get behind his dislike of cosplayers.

The storm declares Captain Atom is “less than nothing” to an elemental like him, and knocks Cap to the ground.  Red Tornado threatens to scatter Cap’s atoms into the stratosphere.  Cap warns him (with the Captain-Atom-is-mad-eye-flare) of the kind of damage he can do when he is angry.  It is at this point that the swamp declares it has had enough. Vines creep up from the ground and pull Cap down.  His Justice League team-mates Black Canary, Blue Beetle, Mr. Miracle, and Booster Gold find Captain Atom tangled up in the vines, unconscious.

Nate suddenly finds himself out of his metal skin (completely naked) in a grassy field with his deceased wife Angela.  Angela is pulled away from him by an angry windstorm (Red Tornado) and Nate switches to his Captain Atom persona.  In reality, Cap is on board the JLI shuttle, unresponsive.  Beetle and Booster are trying to fly out of the storm while complaining about the rest of the League failing to show up.

Checking Cap’s vitals, Mr. Miracle makes a huge discovery.  He learns that the metal exo-shell Cap wears is alien in origin.  This contradicts the origin story Cap fed the media (“the lie”).

Back in Nate’s mind, Red Tornado and Captain Atom continue to battle.  Tornado muses over Cap’s refusal to just die.  Cap gives a sarcastic non-answer about the quantum field, and the two find themselves engulfed in a huge explosion.  The turmoil around them suddenly dies down and they find themselves floating in non-space next to each other.  Tornado has a fuzzy recollection of the two of them fighting.

Then their host shows himself. 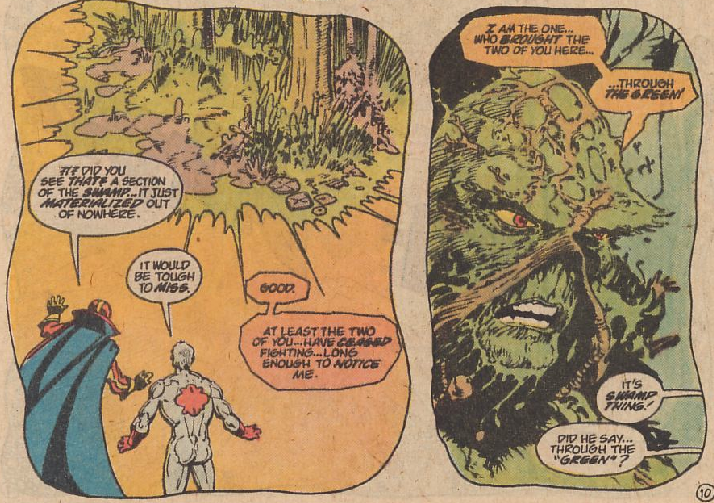 It is Swamp Thing, the Earth elemental, who has brought the two together through the Green.

Booster Gold instructs Beetle to fly the shuttle to California.  The JLI realizes no doctor can help Cap and they can’t stand idly by.  They need a psychic, and since Martian Manhunter was a no-show, they’re paying a visit to Infinity Incorporated and Brainwave.

Back in Cap’s head (or whatever existential plane they are on), Swamp Thing explains they will not be able to return to their physical bodies until the three of them exist in total harmony.  Meanwhile, a fourth entity makes an appearance in their crazy mindscape: an ominous aerial skier.  Swamp Thing says this means they are running out of time.

Red Tornado explains that he does not think he can exist in harmony with Captain Atom as Cap is “one of them.”  He says “they” are “polluters of the bio-sphere.”  He goes on to explain that he once fought alongside humans (he was a member of the Justice League alongside Cap’s frenemy Firestom), even giving his life to them when the Justice League space station was destroyed (this was in Justice League of America (vol 1) Annual #3 [1985] – this actually marks Red Tornado’s return to the post-Crisis mainstream DCU).  Rather than kill him, the explosion transformed Red into a being of wind.  He watched man destroying Earth (abusing the bio-sphere) until he decided he’d seen enough and felt totally justified trying to destroy humanity.

Swamp Thing tells Red they are brothers.  He quickly recounts his own origin story and how he became the Earth elemental.

Meanwhile, Captain Atom’s body has been taken to the headquarters of Infinity, Inc.  where Brainwave, Jr. announces Cap is not in an ordinary coma.  His “silver cord” is dangerously “over-extended.” Brainwave says he cannot help Cap unless he goes to him and promptly passes out.  Mr. Miracle explains that Brainwave has used astral projection to enter Captain Atom’s mind.

Back in the astral world or whatever, Swamp Thing admits that he, too, once lost patience with humanity.  He tells Red that he can learn to temper his fury with mankind as he did himself.  Cap sees the skier in the skies again and decides to go and confront it but Swamp Thing erects a barrier and tells Cap not to go.  Swamp Thing explains it is the Black Racer, a “pure elemental force who deals a fatal touch to his chosen victims with a single stroke.”  And he’s gunning for Nathaniel Adam.

Like Red Tornado, this is the Black Racer’s first post-Crisis appearance.  Created by Jack Kirby in 1971, the Black Racer’s corporeal form is that of bedridden Sgt. Willie Walker, who was paralyzed during the Vietnam War.  Walker was contacted by the Source when Darkseid first brought the war of the gods to Earth, and told it was his responsibility to take on the role. The Racer makes use of what appear to be skis as his means of transport, much like how the Silver Surfer, another Kirby creation, uses a surfboard. New Gods are collected by the Racer at the moment of their deaths, and taken to Hadis (the Fourth World version of Hades).  Thanks, Wikipedia. 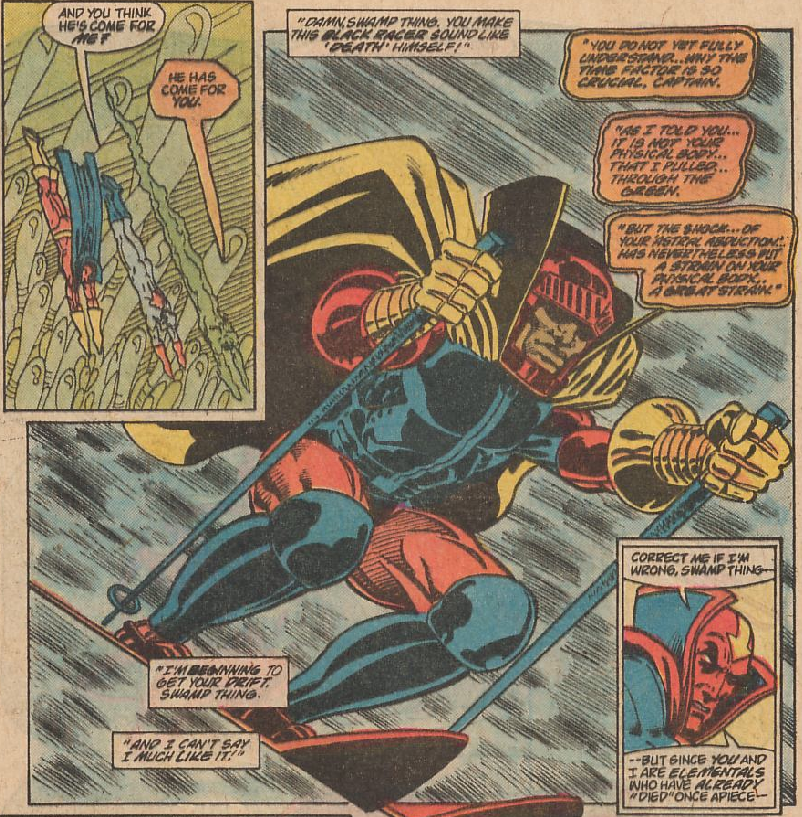 Assuming they can not be harmed by the Racer’s touch (Red Tornado and Swamp Thing’s human bodies are dead), Red goes after the Black Racer.  Swamp Thing leads Cap to a strange swirly mass that he senses is sanctuary, with Red not far behind.  However, the Black Racer can not follow them in, leading Swamp Thing to believe the danger has passed for Nate.

The Black Racer makes one last grab for Captain Atom, but misses his mark when Cap and Brainwave find themselves in reality once again, surrounded by the Justice League.  Captain Atom thanks Brainwave and leaves, much to Blue Beetle’s chagrin.

This is not the end of Captain Atom’s brushes with the Black Racer or Red Tornado.  He and Red end up as allies and the Black Racer never gives up on catching Nathaniel Adam.  The art of this issue is superb, truly Pat Broderick did not phone this one in.  The story was pretty good as well, raising some really important questions about exactly WHAT Captain Atom really is.  I give this issue an A.