So this is the exciting conclusion to the Earth-4 heroes’ Convergence adventure.  It was better that Cap’s last “battle” in Convergence: Justice League International #2.  This time around he was a little more than just a punching bag.  And I really like the dynamic between Blue Beetle, the Question, and Captain Atom.  I would totally read an Earth-4 series with these three as the primary characters.

This issue opens with a quick reintroduction of the characters.  And I immediately have something to pick at. 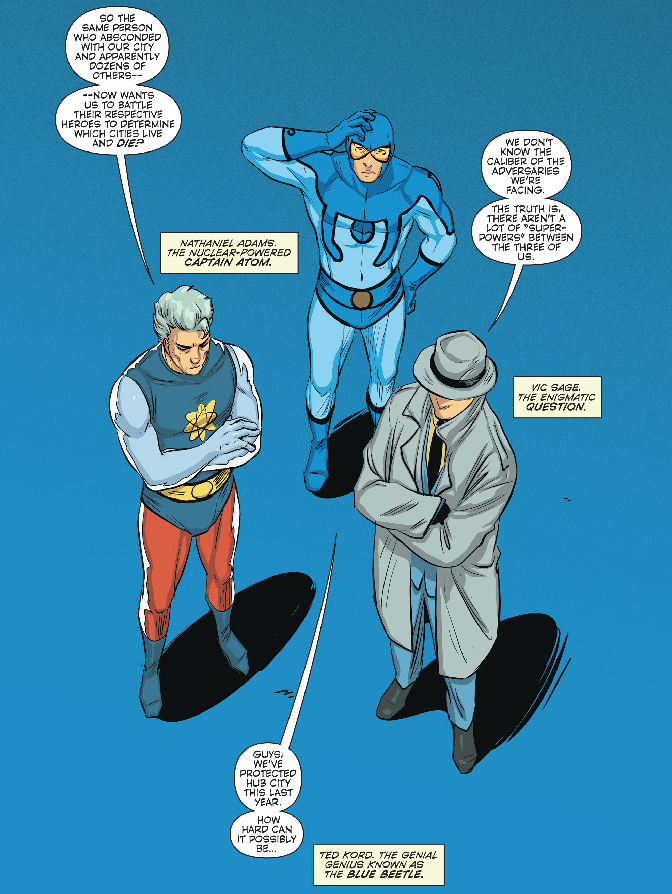 Captain Atom is identified as “Nathaniel Adams.” Now, the Charlton Captain Atom’s name was Allen Adam, but I didn’t so much mind the retconning of him to Nathaniel.  After all, the Nathaniel Adam version of the character was my favorite.  But “Adams?”  It was revealed in the last issue that his last name was “Adam!”  See the panel below from Convergence: Blue Beetle #1: 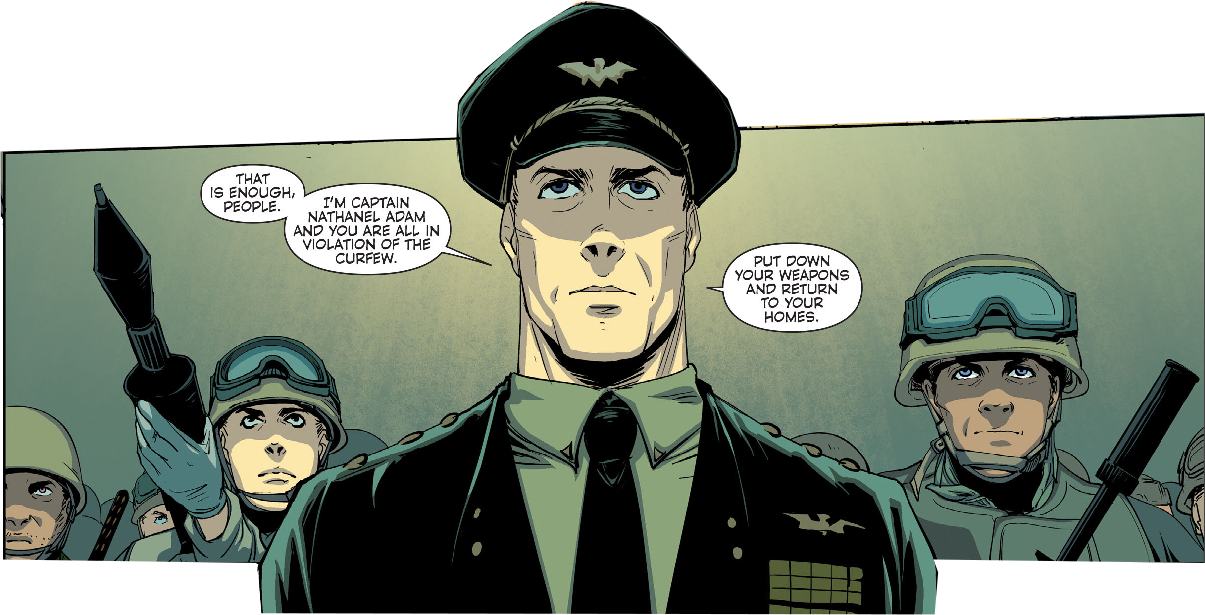 I would love to be DC Comics’ “Captain Atom Fact Checker.”  Heck, I’d do it for free.  I enjoyed this issue and would really like to see more, but that was a little sloppy.  I know it could be worse.  These things happen.  The superhero Breach was once referred to as “Major Adams” (he was originally conceived as a reboot of Captain Atom).

On a downtown Hub City rooftop, the Legion of Super-Heroes descends from the sky to meet with Blue Beetle, the Question, and Captain Atom.  The three Hub City heroes climb atop Beetle’s Bug to meet with them.  The Legionnaires do not come out swinging though.  Cosmic Boy introduces them politely and asks which of the three is their leader. 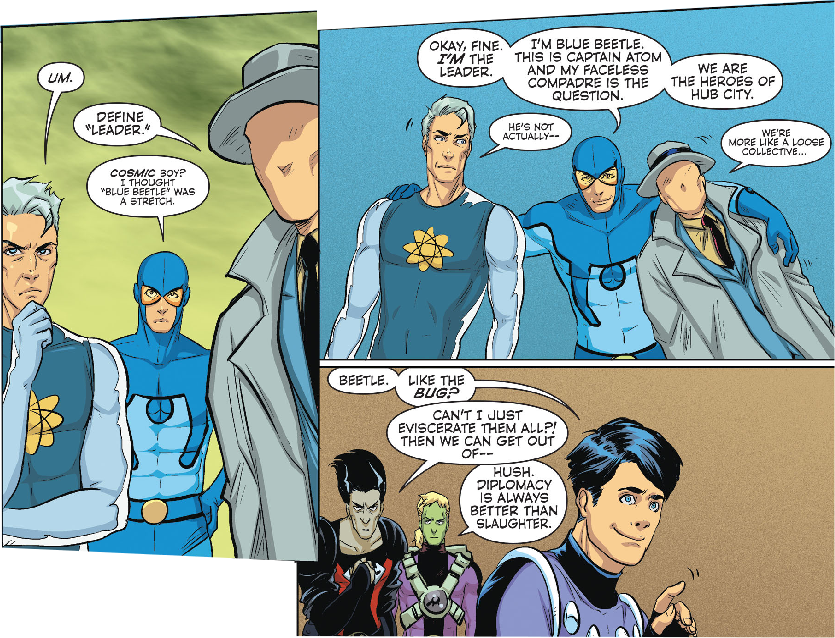 After naming himself leader, Blue Beetle demands that the Legion surrender.  Cosmic Boy declines, saying he has no fear that the three Hub City heroes can take the Legionnaires.

Beetle electrifies the hull of the Bug to slow down the Legion while he, Cap and the Question jump inside.  Onboard, Tracy reveals that she has hacked into the Legion’s flight rings and has gathered tons of data on them.  Cap says he’s uncomfortable with a civilian like Ted Kord having this kind of tech but the Question shuts him up.

The Bug lurches, knocking them all off their feet.  Colossal Boy has grown to the size of one of the neighboring buildings and is shaking the ship.  Andromeda tries to stop him, but the Bug vanishes from Colossal Boy’s hands, teleporting about a mile away to another rooftop.  Their arrival is observed by a stray dog.

I’m wondering, did Blue Beetle always have this advanced tech?  I know he’s supposed to be super smart, but I don’t recall his ship teleporting. And if he had the technology to teleport objects, why did he even need the Bug?

Beetle tells his partners to keep the Legionnaires of his back for six minutes while he cooks something up.

The Legionnaires continue to search Hub City for its three heroes.  They seem split on the task at hand.  No one really wants a fight, but Telos has warned them that the losers’ cities will be destroyed and to not fight is to lose.  Brainiac 5 is confident the Legion can take on the other heroes.  He says only Captain Atom has real “powers,” and he is essentially raw energy.  Of course, Brainiac is wrong, and soon learns it when Cap blinds the Legion with some sort of light blast (new power?) and plows into them. 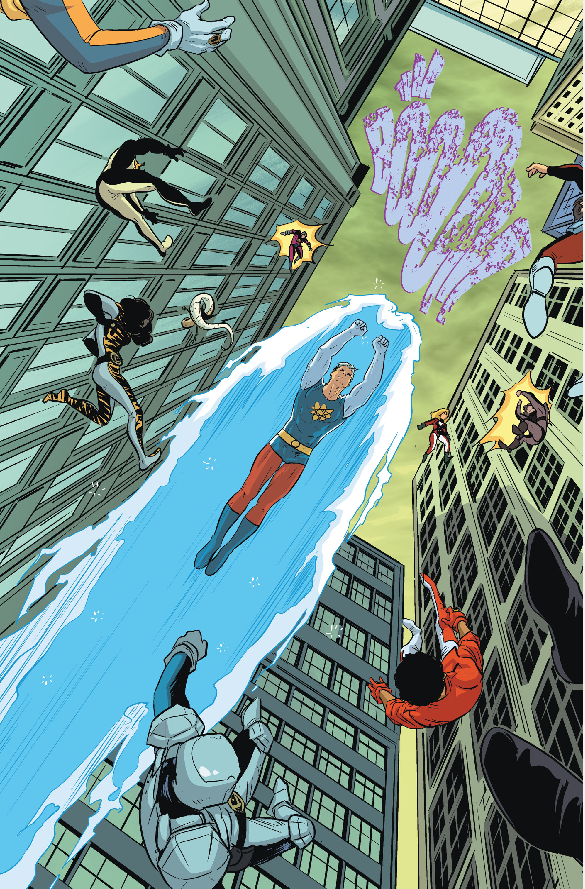 Cap blasts Cosmic Boy with a burst of energy.  Andromeda goes after Cap, but is knocked back by Chameleon (who seems to be bouncing off buildings for some reason).  Invisible Kid takes Cap from behind and grabs him as Ferro and Star Boy swoop in.

Back on the Bug, Beetle is reading up on a group of Legionnaires, hoping he has found the right ones for his plan.  Tracy tries to shoo away the stray dog (who has now boarded the ship), but Beetle decides to adopt him. 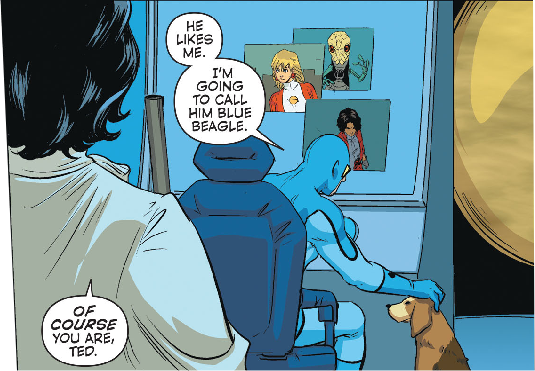 The Question takes on Brainiac 5 (no longer blinded) and seems to defeat him with a riddle.  Karate Kid asks the Question what he’s done to Brainiac.  I wonder, am I the only one who sees a missed opportunity here?  Karate Kid ends up fighting Earth-4 Charlton characters, but Judomaster is not among them?  How coold would that have been?  I mean, it seems like a no-brainer to me.

And just what the heck did the Question do to Brainiac 5?

Saturn Girl, Sensor, and Computo board the Bug.  Their Legion flight rings led them to Beetle’s hiding place.  Beetle tells them he needs the three of them for his plan.  They say it is crazy, but is it crazy enough to work?

Outside, Cap is facing off against Cosmic Boy, Andromeda, and Colossal Boy.  It looks as if this battle will soon be over for Captain Atom. 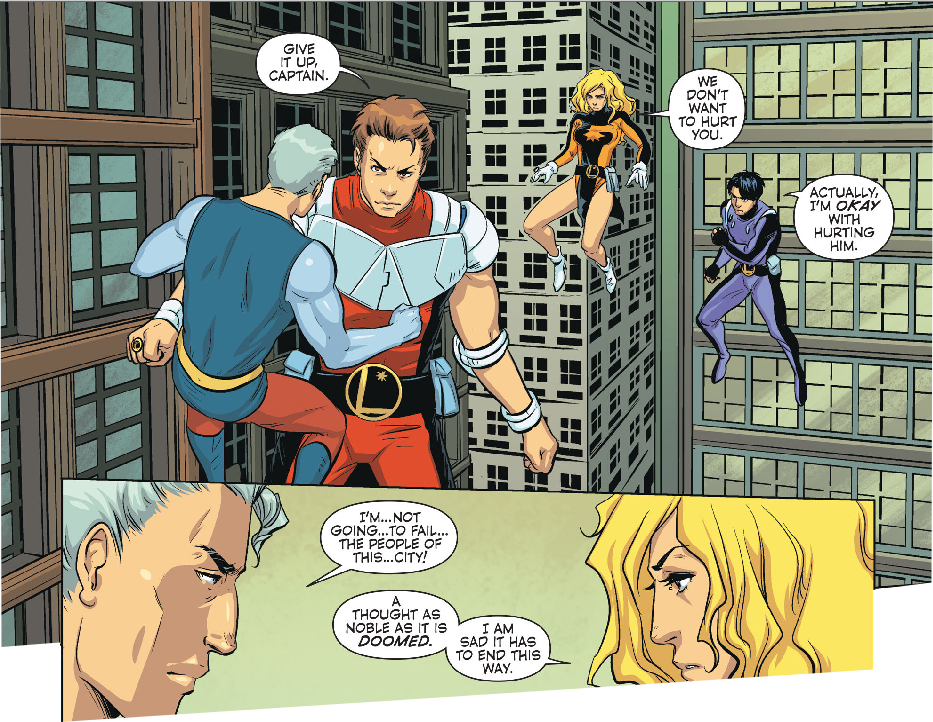 Just then, Hub City is hit by an earthquake.  In a matter of seconds the city is decimated.  All the heroes are seriously bummed out by this unexpected turn of events. 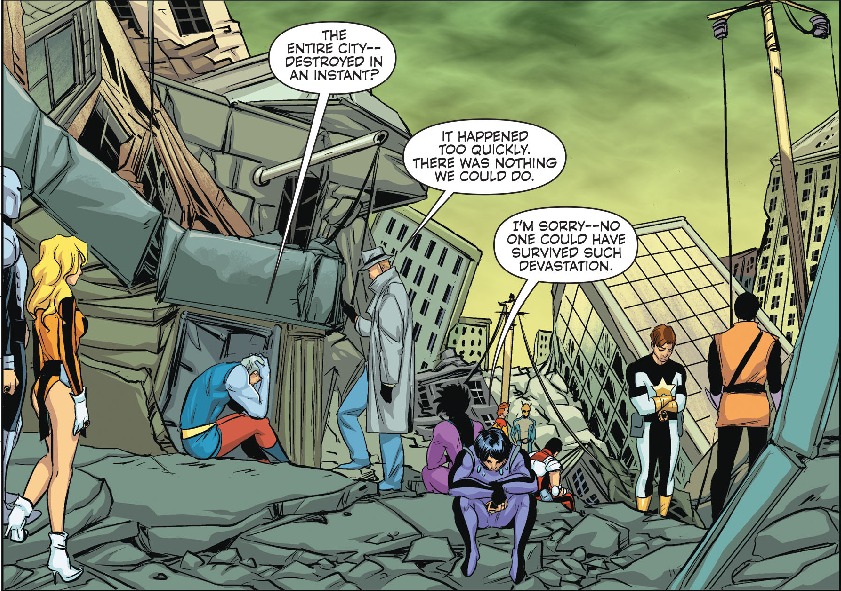 The Hub City heroes and the Legionnaires board the Bug, where they make a shocking discovery.  Looking outside the Bug’s windows, Hub City appears standing tall and suffering no damage.  Beetle reveals that he, Saturn Girl, Sensor, and Computo used their powers to make Hub City appear destroyed to the outside world.  This way Telos thinks he got his winner and the heroes can focus on teaming up to defeat him. 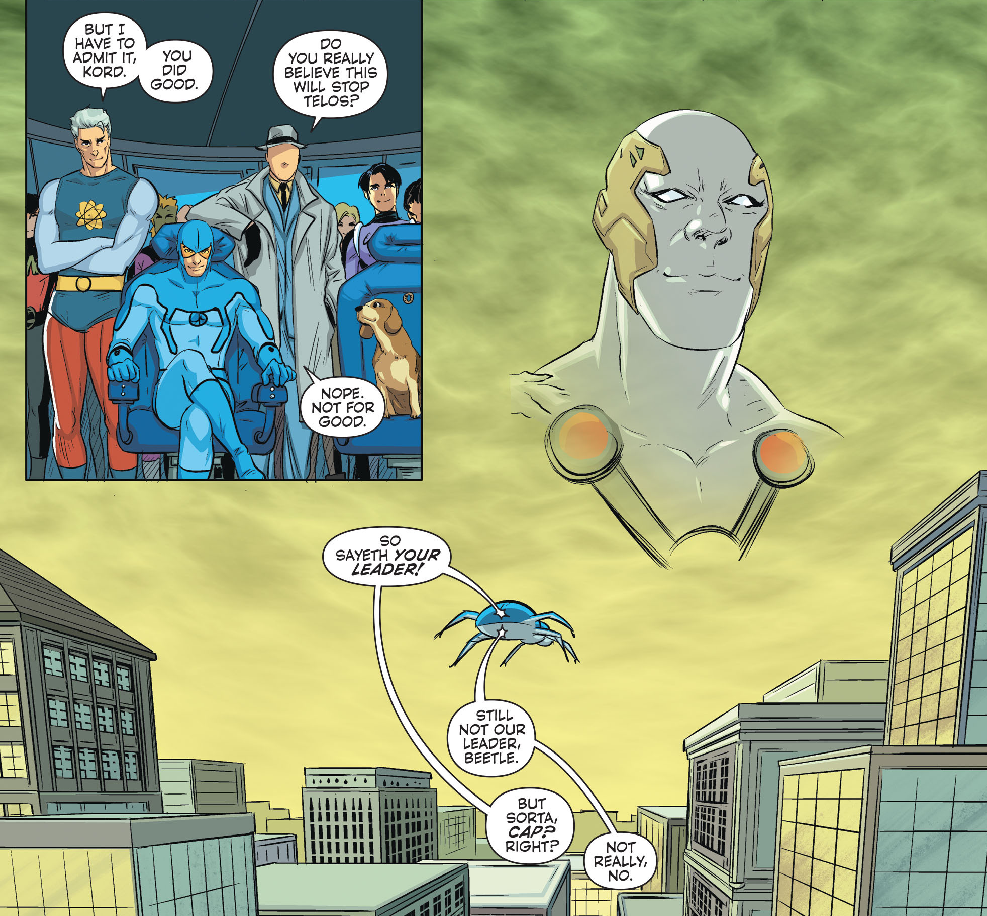 I really enjoyed this comic.  After the let-down of Convergence: Justice League International #2, I was not expecting much from this issue.  I was pleasantly surprised.  Not only did Captain Atom have a nice juicy role, but Blue Beetle got to show off his brains.  And the Question was there.

Okay, so the Question didn’t do much, but I like seeing him in action with Cap and Beetle.

I liked this story. It was clever and cute (particularly Blue Beagle).  And I really like Yishan Li’s style.  I wish this was an ongoing series.  I give this issue an A.