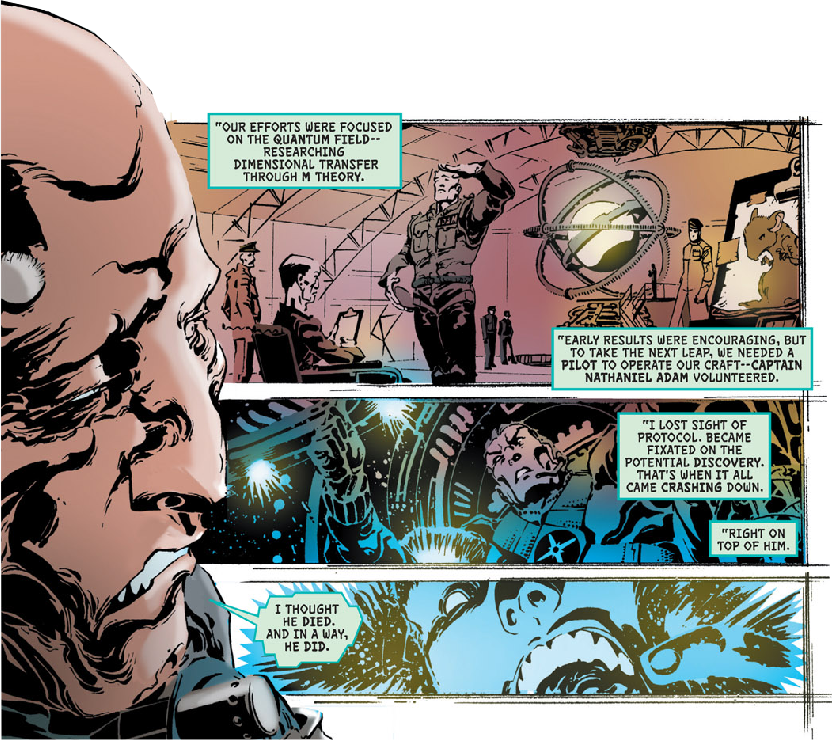 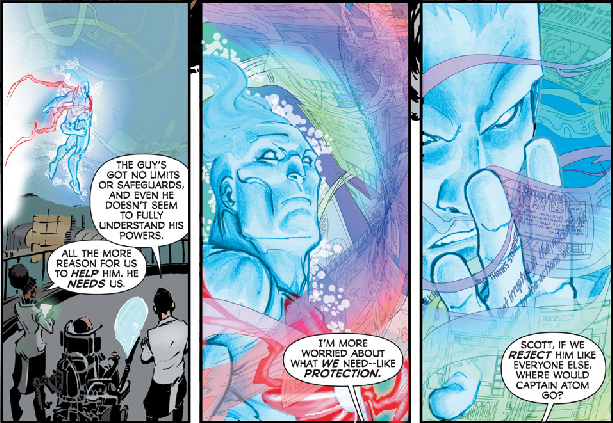 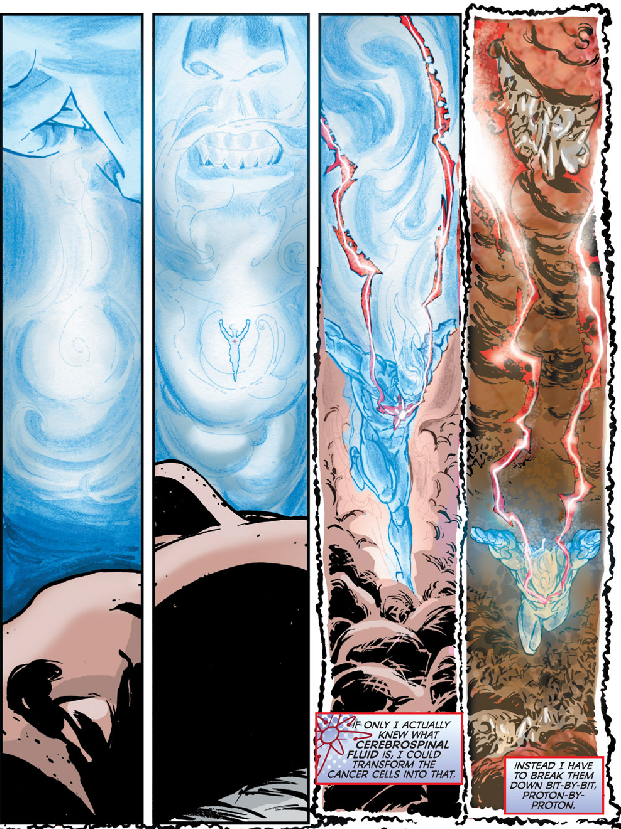 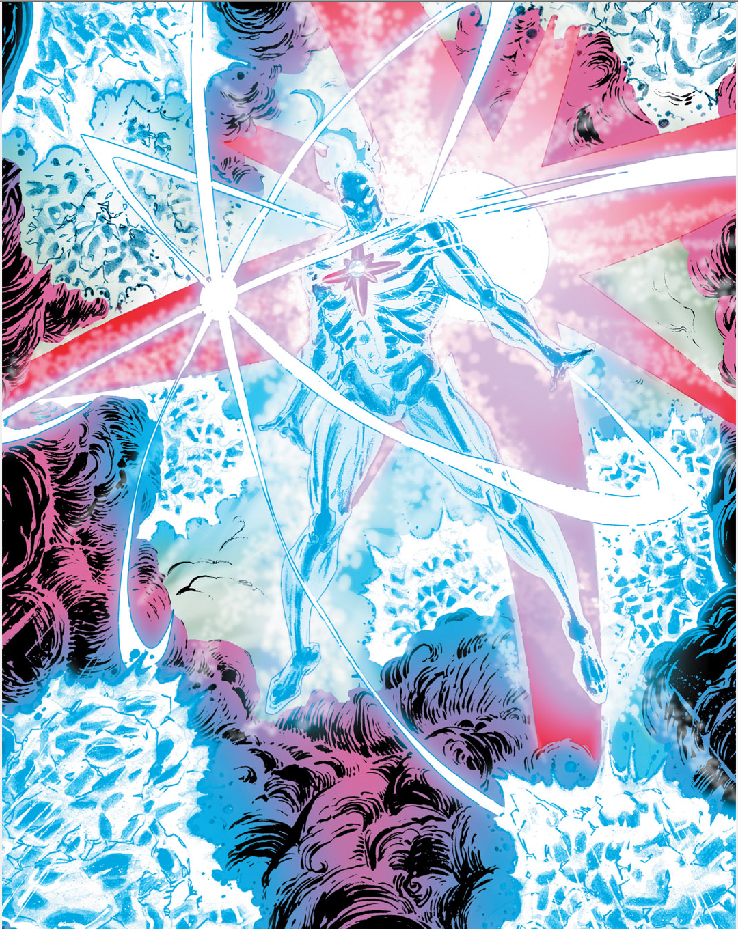 “Evolution of the Species”

And then there was the New 52.  In September, 2011, DC Comics consolidated and relaunched their comic lines, discontinuing some series, and introducing yet other series, resulting in 52 titles, each with a new #1. That consolidation included the incorporation of both WildStorm Productions and the reincorporation of certain Vertigo properties into the mainstream DC Universe.  One of the characters given another shot at a series was Captain Atom (the New 52 also saw the return of Firestorm, the Nuclear Man – one of Cap’s old buddies).  Captain Atom (volume 3) #1 was available for sale on September 21, 2011.  It did not feature an origin story (that was to come a year later in Captain Atom #0), but did again establish that Nathaniel Adam was an Air Force pilot who somehow gained super powers.

The story opens (after a brief interlude in San Francisco with a rat rummaging around a sleeping homeless guy) in Chicago with Captain Atom blasting a robot dude on the streets.  He chides his enemy, telling him that “firing energy cannons at the guy who absorbs energy – not the smartest strategy.”  Preparing to punch the guy and “crack his eggshell,” Cap pauses as he notices something on a microscopic level.  He evaporates the man’s robot armor – turning it to dust – then gazes at his hand (which appears to begin dissipating), thinking he is losing his control over his body at the molecular level. 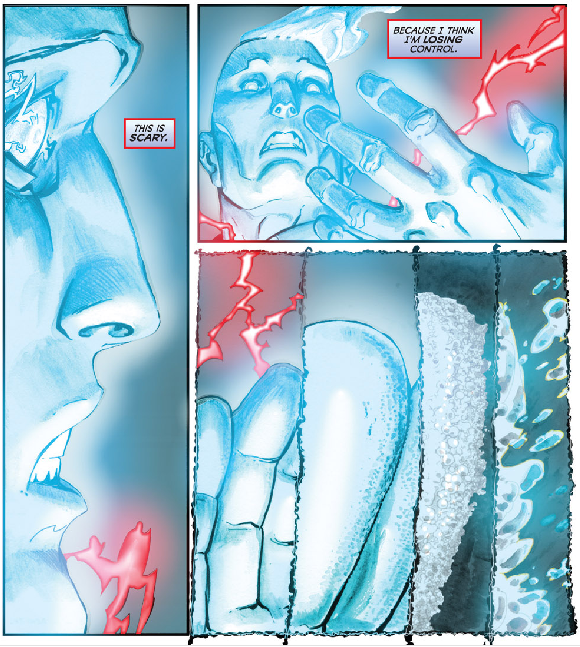 Cap returns to his home base, the Continuum (located “somewhere in Kansas”).  He briefly flirts with Dr. Ranita Carter before she is dismissed by Dr. Megala.  The New 52 Megala is even more crippled than the Modern Age Megala.  Megala asks Cap what went wrong with robot guy.  Cap sums up the exchange. 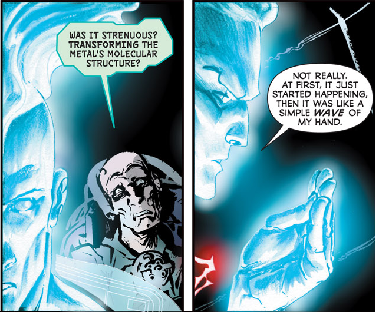 Dr. Megala explains that Captain Atom’s powers are nuclear in nature; that he taps into the SNF (Strong Nuclear Force – the energy that binds protons and neutrons in the nucleus).  His body seems to split atoms repeatedly, giving him incredible energy.  His hand became unstable because it did not reform the atoms as quickly as it split them.  Megala explains to Nathaniel that he was lucky it was his hand and not his brain.  He would cease to exist.  In simple terms, using his powers could kill Captain Atom. Ranita interrupts the two with information that there is significant seismic activity detected in New York City.  As a result, the nuclear reactors at Indian Point are critical and a breach is iminent.  It is not the result of an earthquake, but a volcano in Manhattan.  Captain Atom doesn’t hesitate, flying for New York. Cap makes it to Indian point from Kansas in about an hour (the original Captain Atom could also fly at super speeds).  Cap absorbs the leaked radiation while Megala’s words haunt him (“Using your powers could kill you.”).  That part of the crisis averted, he moves his attention to the volcano.  Realizing there are too many people in harm’s way to effectively move them all to safety, he transmutes to lava into snow (“the opposite of lava,” he thinks).

Meanwhile, on the streets of San Francisco, a homeless man is chasing a rat.  His homeless pals thinks he plans to eat it, but the rat (with ominous glowing red eyes) has been stealing his food and he wants to break it’s neck.  But before he can get his hands on it, the rat transforms into a multi-limbed, multi-mouthed monster.  Interesting interlude that I’m sure will pay off later.  Back in New York, Captain Atom is determined to stop the volcanic threat at the source.  The heat is producing too much energy for him to absorb (it isn’t yet established whether or not the New 52 Cap will “time bump” when absorbing too much energy [as he predecessor, the Modern Age Cap, did], but clearly there are limits to how much he can take in before harming himself).  He jumps into the volcano, trying to neutralize it at the source.  Although he does manage to “put out” the volcano, the heat begins to tear him apart and he can feel himself losing control.

As he melts down, he thinks to himself, “If this is the end, at least I died doing some good for once.”  Meaning what exactly?  Is this Nate also a war criminal?  Has he hurt people?  When the New 52 was introduced, the readers were tossed into the new books with their stories already in progress (for the most part).  After a year, DC launched a “zero month” with special issues that featured the character’s origin stories (although this wasn’t the case for Firestorm and some others, it was for Captain Atom).  This means we are fed little bits and pieces of Captain Atom’s history and abilities as the series progressed.  Of course, he didn’t die in this issue because there was a #2.  As well as 3-12 and #0.

I have to be honest.  This is not my favorite version of Captain Atom.  I don’t hate it.  Just not entirely in love with it.  I think he’s too much like Dr. Manhattan.  The original Cap was a brilliant scientist as well as an Air Force Captain.  He was almost omnipotent.  So was Dr. Manhattan.  The Modern Age Cap was just a soldier who gained powers.  And he had some serious limitations.  It is hard to get excited about a guy who can do practically anything.  That’s why I lost interest in Superman.  No real challenges for the heroes.  Also, at first, I was not super crazy about Freddie Williams artwork.  I thought it looked kind of sloppy.  It has since grown on me and I now think it is quite good.  It has a certain dark and ominous tone.  And J. T. Krull certainly had me hooked with the story.  I wanted to know more about Nate, more about Ranita, and was extremely curious to find out whether General Eiling or Major Force would return.  Or perhaps someone from Cap’s Silver or Bronze Age days.  Nightshade?  The Ghost?  Dare we hope, the Fiery Icer or Iron Arms?  One can dream.  I give this issue an A-.