In the previous issue of Firestorm, the titular character (whose secret identity is Ronnie Raymond and Martin Stein) interrupted a press conference being held by Vice President George H. W. Bush.  He has announced that he has begun to disarm nuclear weapons around the world, belonging to both the United States and the Soviet Union.  It is his intention to force the two super powers into nuclear disarmament.  This decision has proven to be unpopular with world leaders.  Already the president has contacted Amanda Waller, who says Belle Reve Prison can hold Firestorm (presumably meaning she will send the Suicide Squad after the nuclear man).  Firestorm has warned the governments, “…disarm your nuclear weapons or I will.  And next time I won’t transmute the warheads, I’ll detonate them.”

Cut to Nathaniel Adam, General Eiling, and Dr. Megala watching the story unfold on television (Nathaniel’s hair is brown rather than white).  Eiling is pissed off, naturally, but Nate seems somewhat sympathetic to Firestorm’s cause.  Both Megala and Eiling argue that Firestorm’s plan will do more harm than good.  Nate says that Firestorm may be a fool, but a well-meaning one.

At the Justice League’s New York headquarters, Green Lantern Guy Gardner is itching to go after “that commie scum.”  Martian Manhunter says, “Not unless we all agree.”  Dr. Fate, Captain Marvel, Blue Beetle, and Mister Miracle attempt to stop Guy from going after Firestorm, but it is Oberon who stops the agitated Green Lantern (using an oversize mallet).

In the Oval Office, President Reagan has asked Superman to go after Firestorm.  The man of steel declines, indicating he is also sympathetic to Firestorm’s plight.  Reagan then addresses the nation, saying he and Premier Gorbachev are neither accepting or declining Firestorm’s ultimatum.  They want a face-to-face meeting with the super-hero.

Watching the address on television, Professor Stein seems quite pleased with the outcome.  As he tells Ronnie, “they have no idea we’re bluffing.”  Ronnie says it sounds like a trap to him, but goes along with the Professor.  As Firestorm, they go to police chief Bernard Ferguson and ask him to pass along word that he’ll meet Reagan the next day at the Statue of Liberty at noon.  He wants Reagan to come alone.

Meanwhile, in the Soviet Union, Mikhail Arkadin is demonstrating the powers he obtained in the Chernobyl disaster.  Mikhail was introduced in Firestorm #62, but is now wearing a modified Rocket Red suit and is being called “Pozhar.”  Arkadin will play an important role in Firestorm’s life in the next few issues.

Noon the next day, Firestorm arrives at the Statue of Liberty.  Reagan is there, and asks that the hero touch down and talk with him.  Ronnie feels like something is wrong, and indeed it is.  He is bum rushed by Captain Atom. 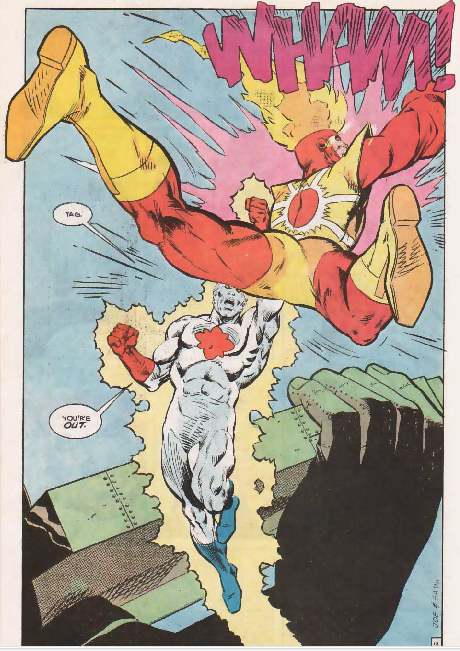 Cap tells Firestorm he’s caused an international incident.  He reminds Firestorm that he took the nuclear man down once before, and is capable of doing it again.  Firestorm brushes off Cap’s atomic blast and says he won’t be stopped by “some headline-hunting glory hog.”  He then punches Cap right in the silver face.  He tells Stein he thinks he broke his hand, to which Stein replies that Ronnie is using the same tactics he did last time he fought Captain Atom, and those tactics failed him.

Firestorm conjures up a kryptonite bat, hoping Captain Atom shares the same weakness as Superman (he does not), and Cap is knocked back.  Firestorm then rains bricks on Cap, who calls Firestorm a “brat.”  Firestorm then smashes Cap between two boulders, momentarily stopping Atom.  Stein warns Ronnie that he feels a seizure coming on (Professor Stein has a brain tumor and is dying).  Captain Atom realizes there is something wrong with Firestorm, but is still resigned to bring him in.

Captain Atom grabs Firestorm from behind, and Firestorm fires a blast at Reagan.  Atom quickly flies down to intercept the blast, which turns out to be a huge ball of harmless daisies.  Firestorm takes off towards the city and Captain Atom follows.

The chase leads them through the offices of a comic book publisher in New York City (an unnamed comic book publisher, specifically the office of a comic book writer that may or may not be John Ostrander).  There is a miscolored panel at the bottom of page 18 in which Captain Atom’s head is not silver.  The two heroes cut a path of destruction through DC’s offices, passing (among other people) Joe Brozowski and Denny O’Neil talking about Joe drawing the very page they are on (meta!).

Leaving the DC offices, Captain Atom blasts Firestorm into another building.  When he goes down after him, Firestorm is nowhere to be found.  Captain Atom sees and weak old man and a young redheaded jock and asks, “Where is he?!”  The redhead says Firestorm flew through the floor.  Captain Atom curses and flies off looking for Firestorm.  Of course, the old man and the jock were Professor Stein and Ronnie Raymond (Captain Atom does not know Firestorm’s secret identities).  I really liked that move.

As Ronnie helps Professor Stein home, Reagan addresses the nation on television.  He says the U.S. will not “accede to the ultimatums of terrorists.”  At Belle Reve Prison, Amanda Waller is on the phone with some government big wig (possibly General Eiling).  She says she has the Suicide Squad ready to bring Firestorm in.  On her desk are pictures of Killer Frost, Rick Flag, the Parasite, Captain Boomerang, Deadshot, Slipknot, and Multiplex.

I loved this issue.  I was always fond of Captain Atom/Firestorm stories, whether they were fighting together or against each other.  Over the years, I’ve gone back and forth on John Ostrander.  Some of his stuff I really loved but some of it I really hated.  This story is an A+.  It sets up a lot of big changes coming Firestorm’s way.  I also really liked the way Joe Brozowski drew Captain Atom.  Except for the couple of coloring mistakes, this was a beautiful book.  An A- for art gives this issue of Firestorm an A rating.