Like Julius Caesar in 49 BC, FKAjason and Roy “Charlemagne” Cleary cross the Rubicon with Booster Gold, Skeets, Superman, and their new pal Z. Finally, the origin of Booster Gold is revealed by Dan Jurgens, Mike DeCarlo, Nansi Hoolahan, Augustin Mas, and Alan Gold. We then turn our sights on the new Doctor Spectro trying to get a piece of Captain Atom’s lie with Cary Bates, Pat Broderick, Bob Smith, Carl Gafford, Duncan Andrews, and Dennis O’Neil. All of this and more are found in today’s reviews of Booster Gold (vol 1) #6, and Captain Atom (DC, vol 1) #6. Plus, your listener feedback!

Check out our Tumblr for images from this issue.

This time out, Jay and Roy review Booster Gold (vol 1) #4 by Dan Jurgens, Mike DeCarlo, Nansi Hoolahan, and Augustin Mas. Thorn, Booster, and Skeets battle Mindancer, Blackgaurd, and the 1,000. Then we review Captain Atom (DC, vol 1) #4 by Cary Bates, Pat Broderick, Bob Smith, Carl Gafford, and Augustin Mas. Nathaniel Adam is finally reunited with his daughter after his 18-year-absence. Plus, scads of your listener feedback!

Check out or tumblr page for images from this issue. 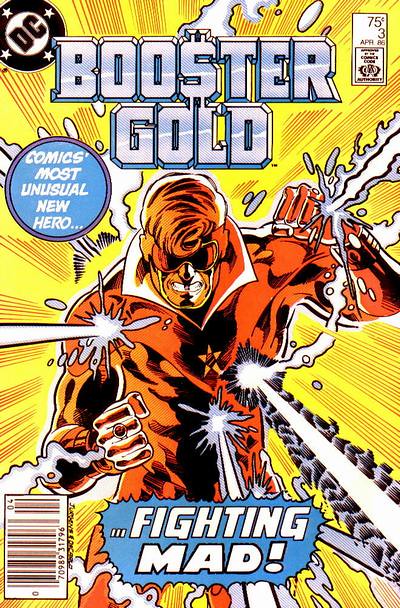 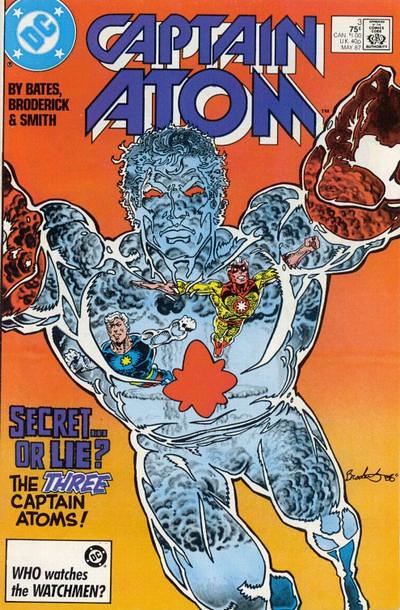 Also, FKAjason and Charlemagne’s secret origins are revealed, that’s what friends are for, Booster in peril, Thorn’s fashion choices, The Love Boat, Booster Gold looks like an idiot, typical Eddie, a wall of balls, Mindancer’s brain bolt, Firestorm as the star of the book, Captain Atom’s creepy meeting with his daughter, and Nate going critical.

Remember to use the hashtag #SNGPOD when commenting on social media!

Also available on iTunes and Stitcher!

Check out our tumblr page for images from this episode. 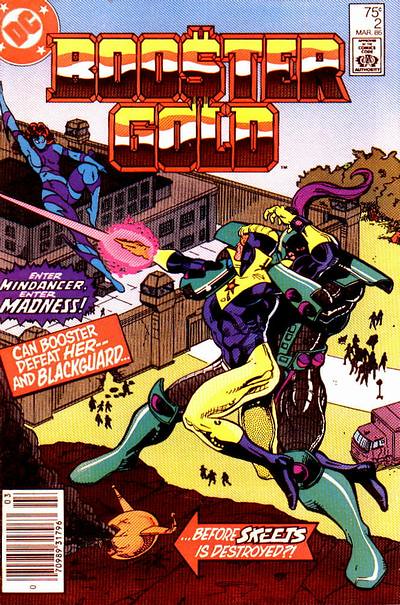 Check out our tumblr page for images from this episode.

In the first (and possibly last and only) episode of the Silver and Gold Podcast, Roy and Jay Discuss and review Booster Gold #1 (from February 1986 and written and drawn by Dan Jurgens with inks by Mike DeCarlo, colors by Tom Ziuko and letters by Augustin Mas) and Captain Atom #1 (from March 1987 and written by Cary Bates with pencils by Pat Broderick, inks by Bob Smith, colors by Carl Gafford, and letters by John Costanza).  The Silver and Gold theme song is Heart of Gold by the Roy Clark Method.

This podcast was inspired by Shag and Rob of The Fire and Water Podcast. If response to the podcast is positive, we will continue recording and make this a regular show.

Click on the link below to play this episode.

I always wonder if I should write it as “Boo$ter Gold.”  Spellchecker doesn’t like it that way.  Guess I’ll just conform and drop the dollar sign.  But I wonder if he was a British super-hero, would his name be something like “£eonard Gold?”
*
This is, obviously, not a Captain Atom book.  He is simply a guest star, as the newest member of the Justice League (he was added to the roster of Justice League International the same month this came out, in Justice League International (vol 1) #7).  As he really only appeared at the end of that book, posing with the other League members for a photo, this issue of Booster Gold is the first time we’ve seen Cap as a working member of the Justice League.  Prior to this, he was leader of the Sentinels of Justice, but that continuity was erased by Crisis on Infinite Earths.
*
The story opens with Booster Gold stranded in another dimension and facing a choice.  Save the life of his sister Michelle (aka Goldstar) or the lives of 30,000 people on Earth.  The alien, Rangor, is holding Michelle captive as a grey horned giant is set loose in the Hubert H. Humphrey Metrodome in Minneapolis.  As Booster throttles Rangor, his robot companion Skeets reminds him that they came to Dimension X to prevent an invasion and that the invasion has begun.  Booster hesitates, then knocks Rangor out and heads into the gateway to Earth.  He sends Skeets to find his sister.
*
Booster is deposited underneath the Metrodome, and blasts straight upward into the stadium itself.  The creature rips open the roof and emerges out into Minneapolis.  Booster throws himself at the creature but finds it has the consistency of putty and he does no damage.  Meanwhile, Skeets has found Goldstar.  She is very weak and would be dead if not for her costume’s magnetic powers.  Skeets frees her from her bonds.
*
As the monster crashes through downtown Minneapolis, Booster realizes his futuristic weapons seem to have no effect on it.  This is when Justice League International shows up, to whom Booster says, “About time you guys got here.”

Responding to Booster’s call for Justice League help are Mr. Miracle, Martian Manhunter, Captain Atom, Blue Beetle, Green Lantern Guy Gardner, Black Canary, and Rocket Red.  Four of them that are capable of flight (Cap, Martian Manhunter, Rocket Red, and Mr. Miracle) dive into the fight with Booster.
*
The creature blasts energy beams out of its eyes, which don’t hurt Cap, Booster, and Martian Manhunter but blow Mr. Miracle and Rocket Red back (along with Blue Beetle’s bug, which carries Beetle, Canary, and Gardner).  Ugh, too many characters.  Guy Gardner seems like he should be on the front lines.  His ring is, after all, the most powerful weapon in the universe.  But this is during that brief time period after Batman hit him on the head and he became a gentle pacifist.

Down at street level, the other heroes begin rescuing innocents while still trying to bring the creature down.  Martian Manhunter remarks, “…It’s able to absorb even my mightiest blows.”  Mightiest blows?  Who talks like this?  Martians, I guess.  Just when the League is trading quips on how to best dispose of Guy Gardner, the creature rabs Cap and throws him against a building, knocking him out.  (Captain Atom has been knocked out cold so many times since 1960, it’s a wonder he doesn’t have permanent brain damage.)
*
After being almost smooshed by the creature, Rocket Red, Martian Manhunter, and Booster Gold concentrate their fire at it’s face (MM fires psionic blasts from his eyes).  The creature fires back, appearing to vaporize the trio.  But no, they were pulled out at the last second by Mr. Miracle and Captain Atom (who was unconscious for a remarkably short amount of time).
*
Back in Dimension X, Rangor is watching the battle in Minneapolis unfold on a monitor.  Skeets and Goldstar lurk in the shadows.  Meanwhile, at Booster’s mansion, a shadowy figure on a computer transfers money from a Swiss bank account.  This is an ongoing subplot that ties into Millenium.
*
In Minneapolis, Captain Atom uses his quantum blast powers to bore a hole into the monster.  Booster Gold flies into the hole and begins expanding his force field.  The creature expands until it bursts, leaving it’s gray putty gore all over the streets of downtown Minneapolis.
*
Meanwhile, Goldstar has been discovered.  The aliens beat her down and get ready to kill her when Booster appears and blocks their blasts.  Rangor tells them all their efforts are in vain.  He has an army poised to pass through a much larger gate, ready to invade and conquer Earth.  Goldstar and Booster book it to the chamber where the invasion force waits.  Booster has a moment of self-doubt, thinking he should have sent his sister home; she needs medical attention.  Skeets advises Booster to overload the sphere above the army from which they draw their power.  Booster does this, and it weakens the entire structure.  He scoops up his sister and flies back toward the gateway.
*
The gateway is set to receive rather than send.  Goldstar hurries to the controls to reset it and is hit with an electrical cable.  Booster sees her struck as he is propelled through the gateway.  It spits him out under the Metrodome again and then it explodes.  Out of the wreckage, Booster finds a scrap of his sister’s costume, knowing instantly that this means she is dead.

Twenty-four hours later, off the coast of Maine, a memorial service is held for Goldstar.  The Justice League is in full attendance now, including Dr. Fate.

Fate sends the hovering grave marker of Michelle Carter into “a different realm,” where it will be “forever safe from the ravages of time.”  Booster says his goodbye to his sister via internal monologue.
*
So, Captain Atom’s appearance here is really just a cameo, but it was a really important cameo because it was the first time we saw him in action as a member of the Justice League.  He remained a member – sometimes leading different branches of the League, sometimes lurking in the background – until at least 2011 (a decent 24-year run).  This issue of Booster Gold was well-written and drawn.  An important issue for Booster Gold fans, I’m sure.  If I remember correctly, Michelle “Goldstar” Carter came back to life eventually (as most dead super-heroes do).  When this came out, I didn’t give it a second glance.  Since then I’ve begun a fan of Dan Jurgens’ style.  And he’s a package deal, writing and drawing.  This is A material.