“Only the Dead Know Bialya”

This issue picks up where Justice League International #16 left off. I did not review that issue for this blog because Captain Atom was not featured at all. Check out Boosterrific.com for a fantastic summary of that issue. The two-sentence version is this: Maxell Lord sends Batman, Fire, Blue Beetle, and Booster Gold undercover to Bialya to find out what the dictator Rumaan Harjavti is up to.  Meanwhile Big Barda, Martian Manhunter, Rocket Red, and Gnort are hot on the Cluster’s trail to rescue Mister Miracle. The most notable thing about Justice League International #16 is that Batman goes undercover as Bruce Wayne.

This issue opens at the JLI New York Embassy. Oberon and Captain Atom are watching news reports of the coup in Bialya. Colonel Harjavti has been assassinated and Queen Bee has assumed control of the country.  Cap is very upset that he isn’t with the team in Bialya. 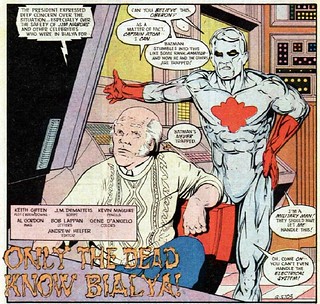 Captain Atom’s ego is bruised because he was left behind. He believes that with his military background, he would have been an ideal choice for the mission. All his angry tirade results in is hurt feelings for Oberon. 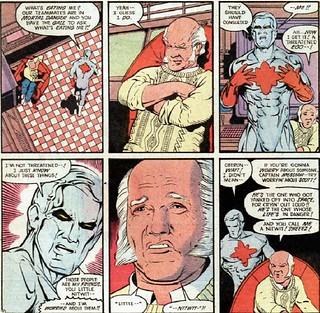 In Bialya, Batman has ditched his Bruce Wayne “disguise” in favor of a Maxwell Lord disguise. He and Green Flame have been holed up in their hotel room, not permitted to leave, for two days. Batman escapes up a wall to go find Blue Beetle and Booster Gold, ordering Green Flame to not leave the room.

Booster and Beetle are being held in a cell in less-than-favorable conditions. When a guard brings them a “bucket of slop,” Booster taunts him into shooting him. When the guard pulls out his gun, he lurches into the cell bars and knocks himself out. As Booster retrieves the cell key, he explains to Beetle that he noticed the guard was wearing his Legion flight ring, which Booster is telepathically linked to. The two heroes escape their cell, only to be grabbed by unseen hands once they are out.

Meanwhile, Queen Bee and Jack O’ Lantern are watching video of their mindless drone Wandjina. Jack thinks Wandjina is dangerous and unpredictable, but Queen Bee assures him the creature is completely under her control. She also says it is time to “induct Mr. Lord.”

Mr. Lord (aka Batman) turns out to have been the one that captured Booster and Beetle. They hear gunshots above them and fear that Green Flame may be in trouble. Green Flame is just fine, as she drops from above into Booster’s arms, wearing nothing but her underclothes. She explains that she was washing her hair when Queen Bee’s men stormed in looking for Max. She jumped out the window in her underwear and hoped for the best. The team splits up.

Batman shakes their pursuers and the heroes meet up on a nearby rooftop (or possibly alleyway). The Wandjina turns up, too. Beetle recognizes him as someone the League met way back in Justice League #2, but he is clearly being controlled by an outside force. The team scatters just as Wandjina delivers some sort of powerful nuclear blast thing. 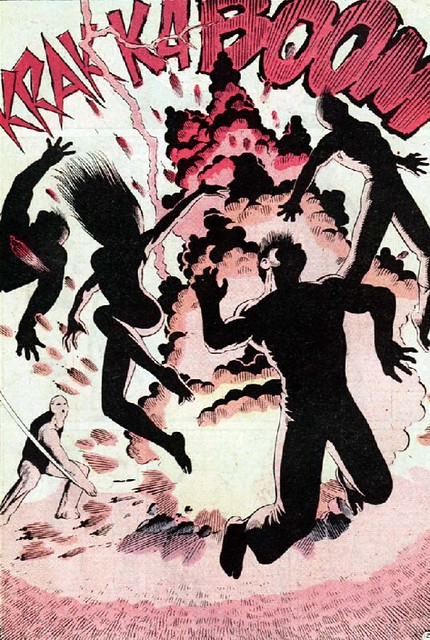 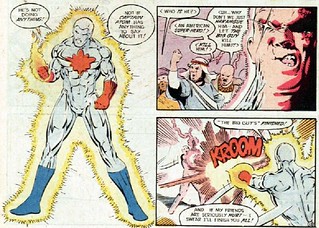 The Wandjina reaches down to do something horrible to Blue Beetle (and judging by the cover, it is indeed HORRIBLE) when the cavalry arrives in the form of Captain Atom.

Captain Atom and Wandjina throw various energy blasts at each other as the rest of the JLI scramble out of their way. Batman is, naturally, upset that Cap showed up at all, as he was told to stay behind in New York.

This fistful of “spaaak” is brought to you by Bob Lappan.

Captain Atom defeats (kills?) Wandjina, leaving him to face the fury of Batman. Bats’ chastisement of Nate is cut short when Queen Bee arrives on the scene. Thinking the Bialyan people will back him, Batman lays into the Queen, calling her “the bottom of the barrel!” This is when the JLI discovers the Bialyan people like their new monarch. Queen Bee tells the JLI their lucky she won’t report their actions to the U.N. and asks Jack O’Lantern to escort them out of the country.

Meanwhile, out in space, L-Ron informs Manga Khan that his captive (Mr. Miracle) is from New Genesis, and is the son of Highfather. Khan orders his robot to set a course for Apokolips. Perhaps Darkseid will barter with him now!

Pursuing Manga Khan is Martian Manhunter, Rocket Red, Big Barda, and G’Nort. They use New Gensis boom-tube technology to try and catch up with Khan. The issue ends with the ship winking out of existence. To be continued.

The “Bwah-ha-ha” period of the Justice League was always fun and I thoroughly enjoyed every issue. I loved that Captain Atom saved the team in this issue (even if he did disobey Batman’s orders to do so). Story and art are both As here. I absolutely love the Giffen/Maguire team.

If you are a fan of this era of the Justice League, there’s a new podcast dropping today that you will really love. From the Irredeemable Shag (of Firestormfan.com and one half of the Fire & Water Podcast) comes the Justice League International: Bwah-ha-ha Podcast. This podcast “chronicles the adventures of the Justice League International era by Keith Giffen and J.M. DeMatteis,” and is part of the Fire & Water Podcast Network. The first episode can be found here and even though (as of this writing) I have not heard the show, I know it will be one of the best comic-book-review-podcasts available. Shag doesn’t mess around.