“A Matter of Choice”

This issue came out October 6, 1987 and was a tie-in with the Millennium crossover event.  Since Cap was seen (briefly) in Justice League International #9, he appeared in Secret Origins #22, Blue Beetle #20, Millennium #3 & 4, Teen Titans Spotlight #18, and Action Comics #596.  Suicide Squad #9 leads into this issue and it is followed by Firestorm #68, both of which also feature Captain Atom.

Four of the books tied in with week four of Millennium had covers that combined (not perfectly) to form one complete picture.  They were Captain Atom #11, Spectre #10, Detective Comics #582, and Suicide Squad #9.

At this point in the Millennium story, Firestorm is working with the Manhunters, having been convinced they are his creators.  Captain Atom has been sent by General Eiling to butt heads with Firestorm in the swamps of Belle Reve, Louisiana.  He’s unhappy that Eiling has given him this assignment and he’s super unhappy that he has to deal with that “most immature hotheaded superhero on Earth” again.  But Cap is unaware of the changes Firestorm has recently undergone.

In the apex of a nuclear explosion were Ronnie Raymond, Martin Stein (the two people who make up Firestorm) and Mikhail Arkadin (a Soviet super-hero with nuclear powers of his own that went by the code-name “Pozhar”).  The result was that a new Firestorm emerged with a body created by Martin Stein but a consciousness that held both Arkadin and Raymond (neither of which had control over Firestorm at this point).  This change began in Firestorm: The Nuclear Man Annual #5 (which hit the shelves in July 1987, three months prior to Captain Atom #11).  Firestorm is still trying to figure himself out (FIRESTORM FAN calls him the “blank slate Firestorm.”  Captain Atom also refers to Firestorm’s “blank slate” in this very issue).

The first part of this book is narrated by Firestorm.  And when he first shows up on page 2, the artwork is just fantastic.  Pat Broderick actually drew Firestorm regularly from June 1982 to November 1983.  I don’t know if he had any great love for the character, but I certainly like his take on this version of the Nuclear Man.

Firestorm has thrown up a wall of flame to stop Captain Atom.  He is protecting a Manhunter stronghold.  Of course, Cap blasts right through this wall.  He flies toward Firestorm, who calmly asks Cap to “please disengage.”  Captain Atom keeps coming, and knocks Firestorm into the trees.  I think this proves who the hot-head really is.

Firestorm tells Cap that he has given his last warning.  He means to stop Cap from waging war on his creators.  Firestorm referring to the Manhunters as such leaves Cap somewhat taken off guard.  Firestorm whips up a pink “molecular storm” within a metal sphere to hold Cap.  Atom begins to suspect the nuclear man might be brain-damaged.  When he tried to blast his way out of the sphere, Cap finds his powers useless.  And Firestorm has locked himself in with Captain Atom.  He can regenerate the sphere’s shell as quickly as Cap can disintegrate it.  Checking his watch, Nate realizes he only has 55 minutes until the explosive (brought into the swamp by the Suicide Squad) detonates.  He decides to relax and have a chat with Firestorm. 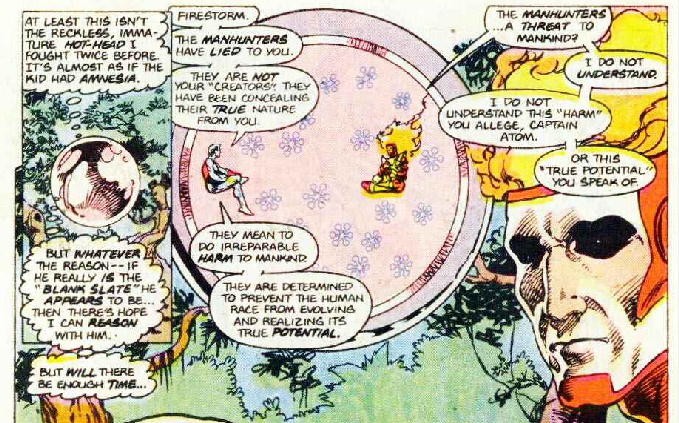 Realizing that this new Firestorm has a very simplistic world view, Captain Atom attempts to explain why the Manhunters are a threat via a story.  He tells of a young boy with a love of airplanes and a gift for aeronautical design.  This boy, however, had an intense fear of flying.  Determined to rid the boy of his fear, his father took him to an airfield owned by a friend.  Explaining that he was a pilot himself, the father strapped the boy into a crop duster and took to the skies.

As they flew, the father talked to the boy, calming him and reassuring him.  Soon, the boy grew to love flying as much as he loved planes.  When he grew up, he joined the Air Force.  As a result, he one day became Captain Atom.  Firestorm says he realizes, thanks to the story, that it would be bad if the Manhunters prevented mankind from realizing their true potential.  But they have never given Firestorm a reason to distrust them (indeed, he is still convinced they created him).  Captain Atom realizes he’ll need another story.

So Cap makes a colossal mistake and shares with Firestorm a story from his “early” super-hero days when he was still “working in secret.”  He tells of a time when he was called upon by his superiors to assist in a search for two career military men who had stolen a van full of top secret government equipment and fled.  Cap was ordered to bring back the equipment and kill the two deserters.  Not liking the order, yet reluctant to disobey his C.O., Cap discovered the van and realized his intel was wrong.  It was a communications van and the two men were on death’s door with radiation sickness.  They had been exposed to radiation in atomic warfare tests in the desert.  They stole the van to take their story to the public, hoping the end result would be compensation to insure the welfare of their families when they succumbed to the sickness and died.  As they explained this to Cap, the Air Force fired an air-to-ground rocket at the men.

Captain Atom intercepted the rocket.  When the smoke cleared, he, the men, and the van were nowhere to be found.  Captain Atom had moved them to a new location and allowed them to broadcast their story.  His C.O. was furious, but Cap said he would not follow orders that he felt were unjust, choosing instead to follow the dictates of his own conscience.  The two men did receive compensation and all charges against them were dropped.

Firestorm darkens and says he understands. He understands that Captain Atom is a liar.  The Manhunters had revealed to Firestorm the true story of how he became a super-hero.  He knows Cap’s story is a lie.  He leaves the sphere, leaving Cap still trapped within.  Firestorm fills the sphere with “toxic gas” and taunts Captain Atom’s attempts to blast his way out.  Old flame-top turns out to be a bit of a bad-ass in this one.  I’ve certainly learned a lesson here – don’t EFF with the Nuclear Man!

At that moment, “a thousand miles to the northeast,” Captain Atom is missing an interview on WGTV.  G. Gordon Liddy is preparing to go on in his stead, but Harry Hadley is waiting in the wings.  He thinks he will go on instead of Liddy, and plans to expose the Captain Atom Project’s “Big Lie.”  A stage hand directs him to the alleyway outside the studio when Hadley begins to light a cigarette.  Outside, he is confronted by General Eiling.

Eiling reminds Hadley that no one from the Captain Atom Project is ever to appear in public anywhere near Captain Atom.  Hadley showing up at the studio at a time when Cap is supposed to appear is tantamount to treason.  When Hadley pulls a high-tech-looking gun, a sniper takes him down.  Eiling remarks that he had suspicions about Hadley all along.

Back in the swamp, Captain Atom is paralyzed in the sphere while Firestorm chides him.  Cap keeps thinking to himself, “Damn the lie.”  He’s beating himself up for lying to Firestorm.  He should have known that the Manhunters, with all their knowledge, would have briefed Firestorm on his true background.  He doesn’t blame Firestorm for not believing him.

Cap confesses that he lied.  He admits it was wrong.  He tries to point out that the Manhunters also lied to Firestorm.  Their plans to conquer the human race are the truth.  Firestorm angrily exclaims, “The truth?  Someone who has been living a lie still dares to talk to me of truth?”  Cap responds by telling Firestorm the whole truth about his past.

Captain Atom tells Firestorm that he was a convicted murderer.  He says that he was part of a secret government project in 1968.  Yadda yadda yadda, he recounts his origin.  We all know it.  He goes on to say that he wants to clear his name and reconnect with the children he left behind.  Firestorm says, “Enough!” and dissolves the sphere.  He tells Cap he is going with his instinct and following his conscience.  He realizes he’s been duped by the Manhunters and wants to help Cap now.

Explaining the bomb the Suicide Squad placed, Cap flies off with Firestorm.  The Squad won’t be able to evacuate from the blast radius in time.  They have less than a minute to act.  Firestorm says he knows what to do.

The bomb detonates.  Captain Atom absorbs as much of the blast as he can without bumping himself into the future again.  That which he cannot absorb is transmuted by Firestorm… into snow.  He says he saw the Suicide Squad escaping to the west; all of them are safe.  The target – the Manhunter base – was decimated.

Firestorm explains that he changed his mind about Cap when he heard him talk about his kids.  His intuition told him Captain Atom was being honest.  The two walk off together with Firestorm full of questions and Captain Atom declaring, “Super-hero school is now back in session.”

Generally I don’t like issues of comics that tie in with big crossover events, but I really dug this one.  It helped that at the time I was reading Firestorm and was invested in both he and Captain Atom.  It also helped that it was a good story.  Cap’s doubt and Firestorm’s ire were compelling.  I always like it when those two butt heads.  The art is great except for one little thing.  Pat Broderick’s style of drawing children is a little weird.  Like Steve Ditko, his kids seem really cartoony.  Other than that, great great work.  A for art and A for story.